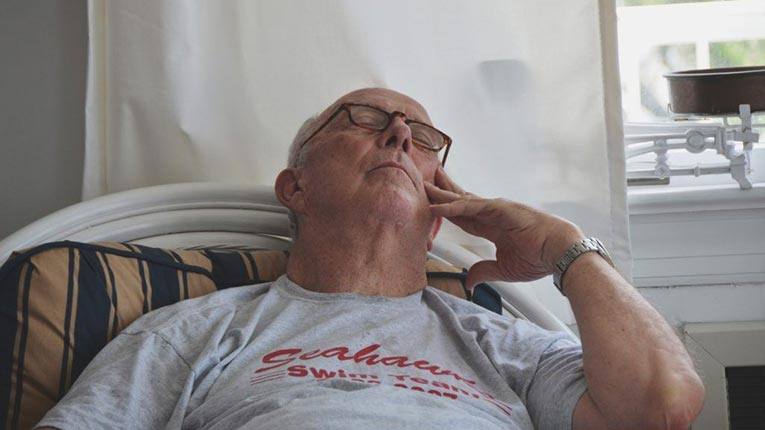 Sleep and Alzheimer’s: How Sleep Problems Can Contribute to Developing Alzheimer’s Disease

Did you sleep well last night? If you did, well done! If you didn’t, and this is a common occurrence, you may want to consider having a conversation with your physician.
By Home Care Assistance - February 25, 2019

Research shows that the quality of our nightly sleep is vital to brain health. If you need an incentive to learn how to have a good night’s sleep, consider that researchers are linking poor sleep with one’s risk of developing Alzheimer’s disease. Despite the cultural norm of admiring people who boast of not sleeping and shaming people who embrace their eight hours, a good night’s sleep is essential to vibrant health. While there is much that is mysterious about why we sleep, researchers are finding out a lot about what happens when we don’t. Following this path has led to many studies that researchers are pursuing. Here we will focus on two:

The Alzheimer’s Society of the UK released a study determining that sleep problems may be an early sign of Alzheimer’s. According to researchers, “Poor sleep may be a sign that people who are otherwise healthy may be more at risk of developing Alzheimer’s disease later in life compared to people who do not have those same problems.”

Over one hundred people with an average age of 63 participated in the study. None of the participants had Alzheimer’s disease but they were at risk for developing it. They either had a parent with the disease or carried the gene that makes them more susceptible to developing the disease. The participants were asked to complete a survey regarding their sleep quality. They also allowed researchers to take samples of their spinal fluid in order to test for biomarkers of Alzheimer’s disease.

The study showed that the people who had sleep issues had more biomarkers for Alzheimer’s disease in their spinal fluid than people who did not report sleep problems. Although the research is far from conclusive, it does provide one piece of evidence that will help scientists determine the factors that contribute to the disease.

The Link Between Sleep Apnea and Alzheimer’s

Need more evidence to fine tune your sleep regimen? Consider this, studies released at the Alzheimer’s Association International Conference in London last year show that sleep apnea does in fact contribute to greater risk of dementia. And the research also suggests that sleep-disordered breathing may accelerate the progression of Alzheimer’s disease. The link between not breathing (apnea) and under-breathing (hypopnea) and dementia was considered before, and attributed to the aging process. This current round of research suggests the sleep-disordered breathing contributes to a buildup of amyloid plaque in the brain which is a key marker for causing Alzheimer’s disease.

This information was announced by Megan Hogan of Wheaton College in Wheaton, Ill., the lead author of this study. Working with data from the Alzheimer’s Disease Neuroimaging Initiative, Hogan and her colleagues reported that the plaque identified on a PET scan “starts to build up before symptoms of dementia begin — and the greater the buildup the greater the symptoms you will have of the disease.” Studying both cognitively normal individuals and those with mild decline, researchers found the same result: that beta-amyloid accumulated faster in subjects with sleep-disordered breathing than in a control group without it. Says Maria Carrillo, the Alzheimer Association’s chief science officer: “Sleep apnea actually accelerated the movement into mild cognitive impairment diagnosis for individuals who had been cognitively healthy just a few years prior.”

It is believed that oxygen deprivation accelerates the process responsible for the development of beta-amyloid plaque in the brain. It is also possible that disrupted sleep, bad sleep quality, not enough REM sleep could prevent the brain’s lymphatic system from working effectively. This system is like a nocturnal brain cleaner that clears away the protein that can turn into beta-amyloid plaque. This is why we need to give ourselves enough time to sleep.

The relationship between Apnea and Alzheimer’s makes it clear that effective treatment of Apnea could slow the progression for those who are in the early stages of Alzheimer’s and other forms of dementia.

Scientists acknowledge that while this study provides interesting findings, it requires more work. One thing is certain: good sleep keeps the brain healthy and healthy brains can help to ward off Alzheimer’s disease and other types of dementia.

There are practices that you can begin to implement today that will pay off in the long run. You don’t need anyone telling you that you need to get a good night’s sleep to have a better more energetic day. But if it helps, the National Sleep Foundation (NSF) recommends that you practice good sleep hygiene. Here are some good sleep habits to develop:

Get a good night’s sleep to promote a healthy brain that is more resilient to the onset of symptoms of Alzheimer’s and other forms of dementia. As researchers continue to decode Alzheimer’s, discover its causes and work toward a cure, we can all strive to take our long-term brain health into our own hands. Keep your minds strong with good, healthy lifestyle practices and adequate sleep. Please shut off your devices, curl up with a great cup of caffeine-free herbal tea, read something relaxing and joyful and tuck yourself in for a restful and restorative sleep. Your brain will thank you.